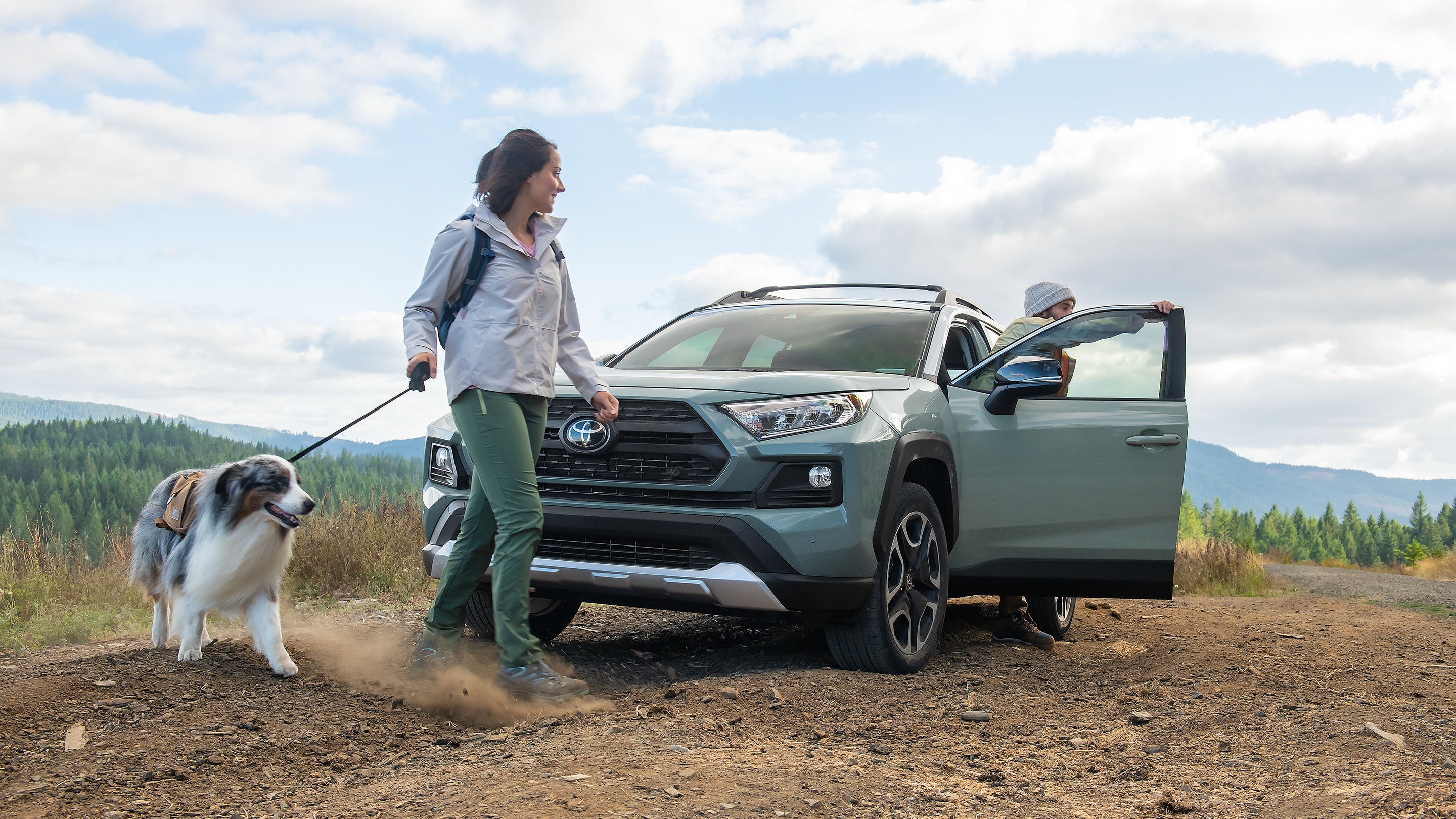 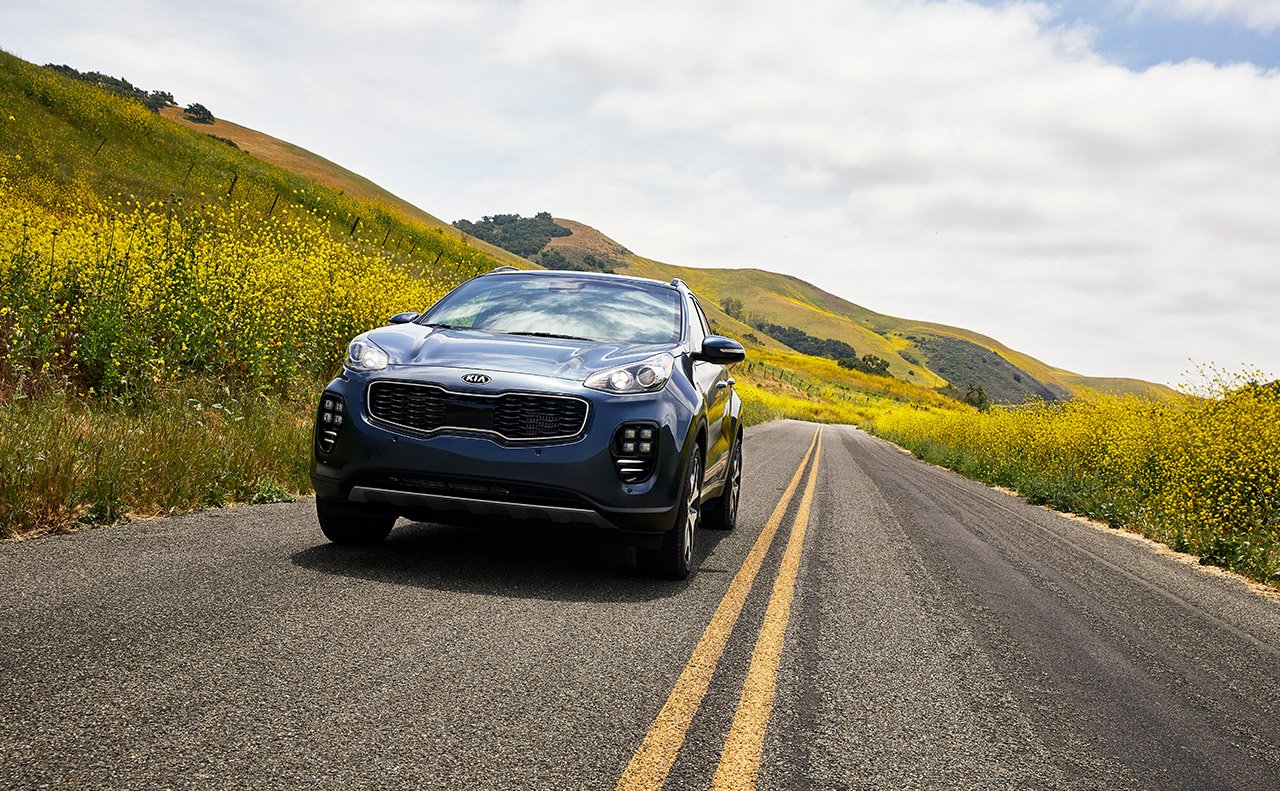 Pictured above is the 2019 Toyota RAV4 (top) and 2019 Kia Sportage (bottom) both with optional features. 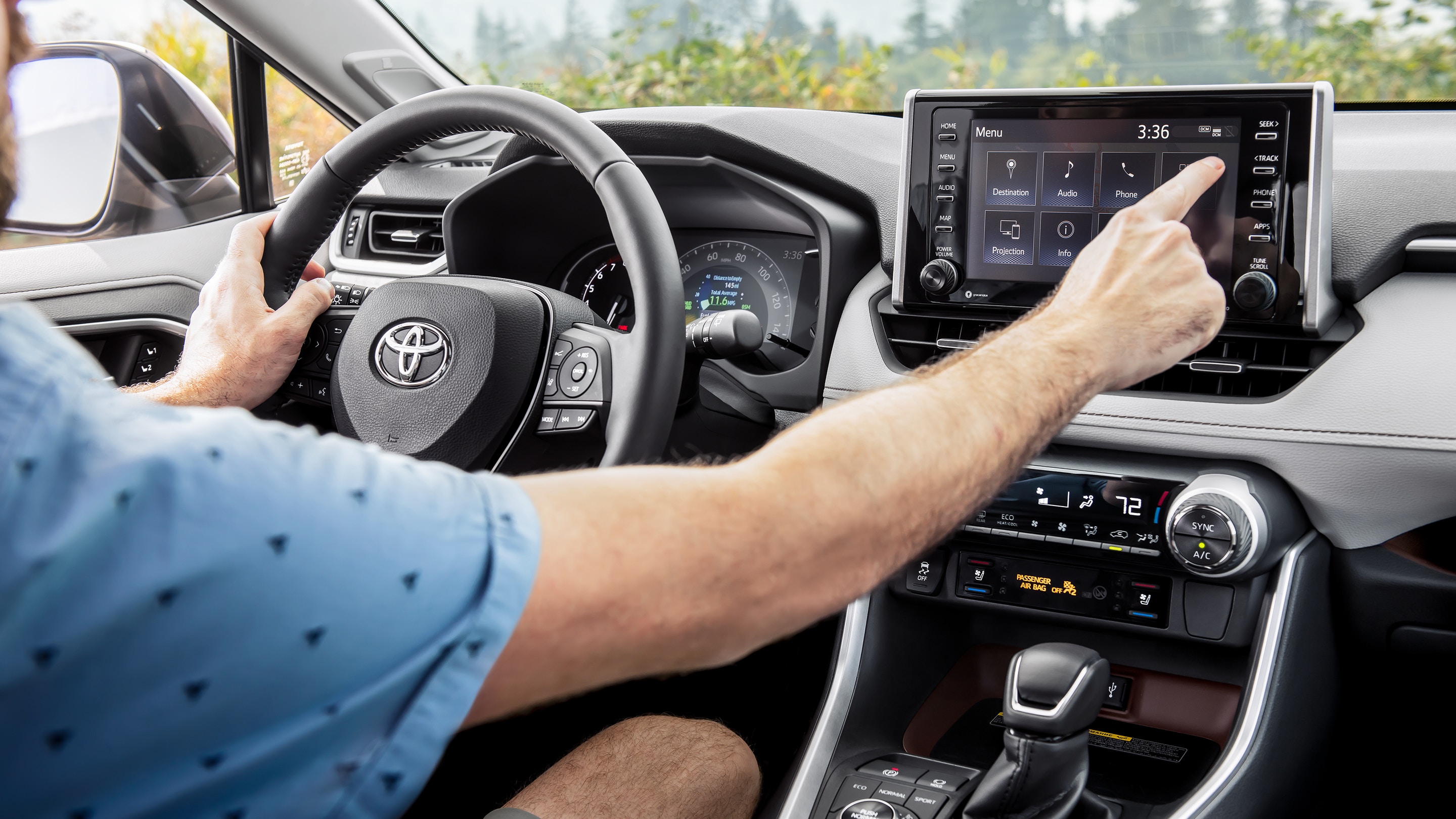 Are you currently on the fence regarding your next compact SUV? If so, consider taking the 2019 Toyota RAV4 for a test drive here at your local dealer, Price Toyota! We’re confident that you’ll be most impressed with this model’s advanced safety features, engaging technology, and balanced capabilities. Before you drop by, take a look at this comparison between the RAV4 and the 2019 Kia Sportage to see what makes this Toyota so outstanding.

We understand that compromising your family’s safety isn’t an option, so let’s explore a few of the features included in the 2019 RAV4 that never stop working to keep you out of harm’s way. For example, if you start to stray from your intended path, standard Lane Departure Alert with Steering Assist1 will be there to help you get back on track. Plus, you’re less likely to be taken by surprise by a sudden hazard, thanks to the predictive capabilities of the standard Pre-Collision System2. Although the Kia Sportage has similar systems, you’ll need to upgrade in order to access them. As if that weren’t enough, the SUV from Kia completely lacks anything resembling the Toyota’s Road Sign Assist3, which displays various traffic postings on your instrument panel to keep you informed on Route 1.

With the peace of mind that the 2019 Toyota RAV4 has your back in times of need, you’ll find it much easier to enjoy its wealth of exciting infotainment features. Through the convenient 7-inch touchscreen media center, you’ll be able to sync your compatible device with standard Apple CarPlay™4. Once you do, you can stream custom playlists, place hands-free calls, and so much more! Meanwhile, should you choose the 2019 Kia Sportage, you’ll have to contend with a smaller 5-inch standard touchscreen that lacks Apple CarPlay™ as standard technology. Not only that, but if premium audio is a must, you might be a bit disappointed with the optional 8-speaker system in the Kia, especially when compared with RAV4’s available 11-speaker setup from the experts at JBL®5!

The Toyota RAV4 keeps building on its lead over the Kia Sportage when we take a peek under the hood. Generating a satisfying 203-hp and 184 lb.-ft. of torque, the RAV4’s 2.5L 4-cylinder powertrain easily outpaces the Sportage’s 2.4L 4-cylinder system, which offers just 181-hp and 175 lb.-ft. of torque. When it’s time to hook up a trailer, the SUV from Toyota won’t back down, thanks to its 3,500-lb. maximum towing capacity6. Unfortunately, the same can’t be said for the Kia, as it falls well short of its rival with just a 2,000-lb. towing capacity7. And while you might think that the RAV4's superior strength would make it less efficient, this isn’t the case at all. In fact, it boasts a standard 26/35 MPG city/hwy8 fuel economy rating to the Sportage’s 23/30 MPG city/hwy9.

So, who do you think came out on top between the 2019 Toyota RAV4 vs 2019 Kia Sportage near Glen Mills, PA? We’re confident that you’ll agree with us that the RAV4 is the better choice. Check it out at Price Toyota today during our convenient business hours! 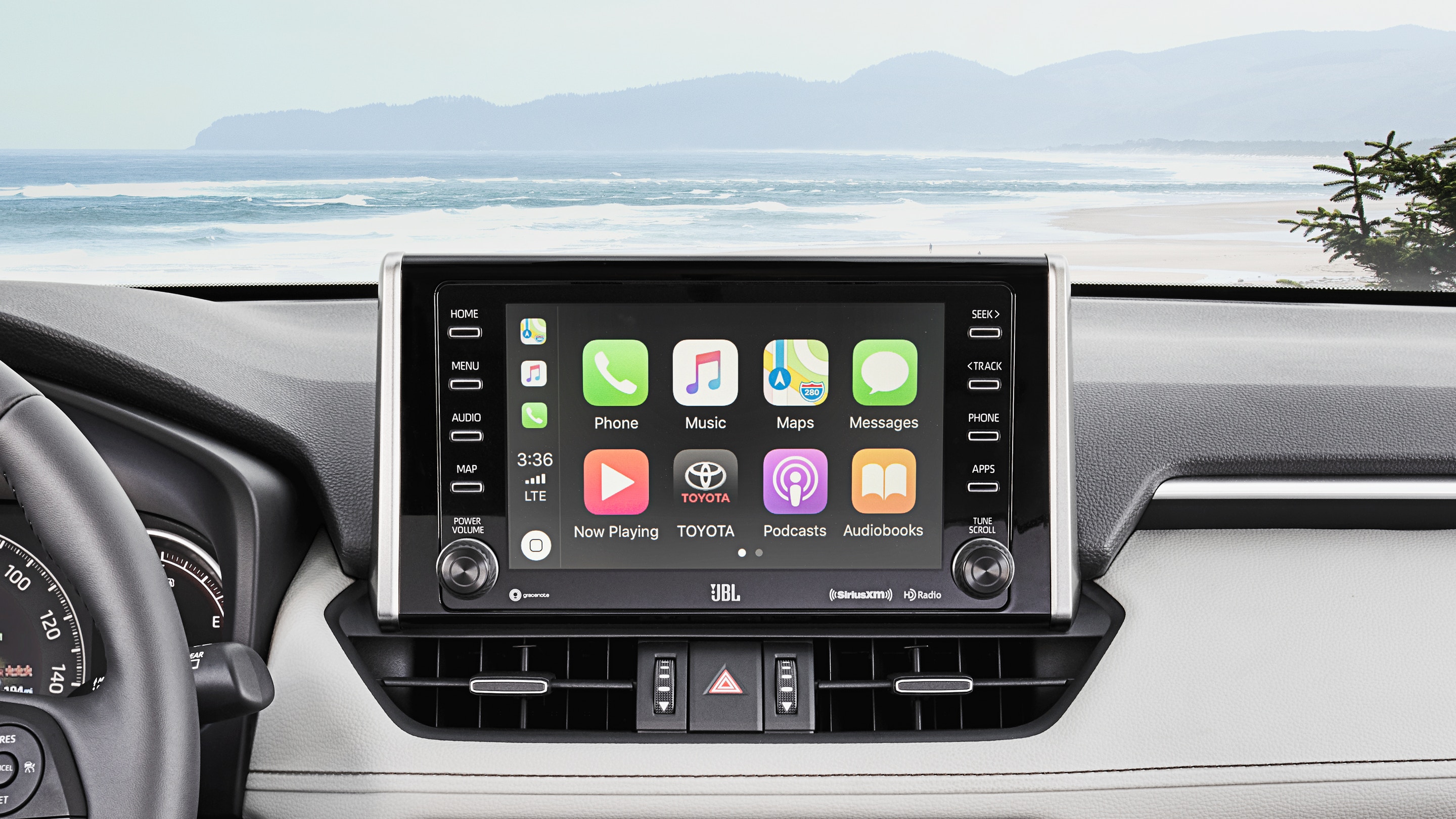 Call us for current offers!

Call us for current finance incentives!

“ We had a very good experience buying our car here and just took it in for service. The service staff were very friendly and professional verifying our scheduled service and asking "is there anything else we can do for you ". Mentioned a noisy power seat back and this was diagnosed and parts ordered. We were given the name of a service person who kept us updated on the progress of the repairs. They were able to fix an issue with a hard shifting transmission with a computer update that our local dealer told us did not exist. Very satisfied and worth the extra drive for such a well run, friendly and professional business. ”

“ I was extremely pleased to see the business following social distancing protocols. Service attendants wore masks and kept their distance. They cleaned the car before and after servicing it. My remote key was placed in a plastic bag for my own safety. I was impressed and satisfied! ”

“ First time buying at a dealership. Mike Casper was great and very accommodating on my test drive (bought my first manual transmission car and I'm still learning). No pressure experience, couldn't be any happier. ”

“ Friendly, professional service, AND great music while you wait. ”

“ Thai review is about there body shop! Mr. Zane is the best person go to he went above and beyond with issue we had appreciated him lot. ”

“ My husband and I had a fantastic experience purchasing our new truck. Mike Casper was our salesperson and he was extremely knowledgeable and helpful throughout the process. Ernie handled the financial aspect of our purchase and he was also very friendly and helpful. I truly can't imagine a better car buying experience then the one we had a Price Toyota! ”

“ Charles Sheets was amazing ! Charles along with Ernie in finance made the process super easy. They educated me on the process and worked with me! Truly appreciate you two! Would deff come again 🙂 ”

“ We were in and out. The only problem was getting a return call from the service department. ”

“ Sales person was very kind and prompt. I believe they did a good jod there. ”

“ They do a good job and are very nice.. but the prices are ridiculous your just paying allot for labor..I spent like 700.00 my parts were only 200.. I know mechanics have to get paid but lord..robbery ”

“ Came in on Memorial Day (I know... But I had to) and was seen immediately by Nick. He took the time to show me my first choice which was pre-owned. Didn't try to sell me new until I asked about the current promotion on new cars. He was bale to get me deal on a new car that was in my price range. All-in-all, I was in and out in under two hours. Very impressed. ”

“ First time ever no hassle when buying a new car!!! ”

“ I have been a customer of Price Toyota for almost 20 years. I have always had great service and I love that all repairs are clearly explained. Whenever I have financial issues they always work with me to ensure I take care of the most urgent issues first and explain what could be delayed to the next or future visits. ”

“ I’ve purchased my last three vehicles from Price Toyota, the last one only 2 days ago. I’ve always had a great experience and will most likely continue to buy my cars from Price. Besides the excellent sales team the service department at Price is great. They’ve always been extremely helpful and keep me on the road. ”

“ The service and experience was great! I would highly recommend this team to anyone who's looking to buy ”

*Pricing of vehicles on this web site may include options that may have been installed at the Dealership. Pricing may include current promotions, incentives, and/or bonus cash from Toyota Financial Services. Monthly payment calculator is an estimate and does not include tax, title, license. $399 doc fee not included. Please contact the Dealership for latest pricing and monthly payment. Published price subject to change without notice to correct errors or omissions or in the event of inventory fluctuations. Price good for 2 days only, please contact store by email or phone for details.

While every effort has been made to ensure display of accurate data, the vehicle listings within this web site may not reflect all accurate vehicle items. Accessories and color may vary. All Inventory listed is subject to prior sale. The vehicle photo displayed may be an example only. Vehicle Photos may not match exact vehicle. Please confirm vehicle price with Dealership. See Dealership for details.

1. Lane Departure Alert with Steering Assist is designed to read visible lane markers under certain conditions. It provides a visual and audible alert and slight steering force when lane departure is detected. It is not a collision-avoidance system or substitute for safe and attentive driving. Effectiveness is dependent on many factors including road, weather and vehicle conditions. See Owner’s Manual for additional limitations and details.

2. The TSS Pre-Collision System is designed to help avoid or reduce the crash speed and damage in certain frontal collisions only. It is not a substitute for safe and attentive driving. System effectiveness is dependent on many factors including road, weather and vehicle conditions. See Owner’s Manual for additional limitations and details.

3. Do not rely exclusively on Road Sign Assist (RSA). RSA is a driver support system that utilized the vehicle’s forward-facing camera and navigation system to recognize certain road signs and provide vehicle information to the driver via the multi-information display and/or Head-Up Display. Effectiveness is dependent on road, weather, vehicle and sign conditions. Use common sense when using RSA and do not drive distracted. See Owner’s Manual for additional limitations and details.

4. Apps and services subject to change at any time without notice. Data charges may apply. Apple CarPlay® functionality requires a compatible iPhone® tethered with an approved data cable into the USB media port. Apple CarPlay® is a registered trademark of Apple Inc.

5. JBL® is a registered trademark of Harman International Industries, Incorporated.

6. Before towing, confirm your vehicle and trailer are compatible, hooked up and loaded properly and that you have any necessary additional equipment. Do not exceed any Weight Ratings and follow all instructions in your Owner's Manual. The maximum you can tow depends on base curb weight plus the total weight of any cargo, occupants, and added vehicle equipment. “Added vehicle equipment” includes additional standard/optional equipment and accessories added by the manufacturer, dealers, and/or vehicle owners. The only way to be certain of your vehicle's exact curb weight is to weigh your vehicle without passengers or cargo.